skip to main | skip to sidebar

On the blog again 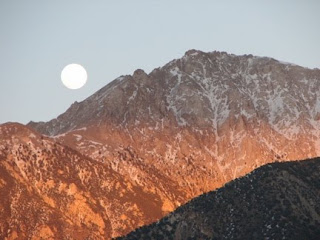 woke at 3am to a thumping noise; outside at the source, i found the cover to the breaker box thumping in a north wind. very cold, front coming in, secured the lid and back to bed. phone rings at 7 am, like a pigs tail-twearly (too early), not for this neck of the woods, people are up and about 630-7. its Win, my neighbor, telling me to batten down the hatches for the incoming storm, the radio says 3-6" in the valleys, gotta run around now and drain the irrigation system, empty water outta the hoses, and a dozen other things before it gets nasty.....and so it goes.

Clouds over the mts, a quick trip to the cafe for coffee, i forgot it back in soco, gulp it down, wreathed in down jacked, crocheyd hat and 2 different gloves, un leash the load from the pickup, camping equipment piled higher and deeper in the office trailer. Enter the cafe, the door opens for me and its Jackie, smiling, i quip "the doorman, oops the door person" she laughs,the skin cracking around her mouth, great lady. She's off into the storm, coffee served by smiling indian waitress, $1.62 for a big one. I emerge to the vision of a blue puff ball, totally wrapped up, helmet, on a pink bike, its Katy, smiling and laughing to see me, one of my favorite recalcitrant kids here, doesn't do her homework even after i impressed on her that that was her most important job in life.

A silver sliver of light focused by the clouds in front of the sun breaking over the east ridge bathes the hills to the west, accentuating the moonscape of granite boulders, gravelly slopes. the mts behind dark and ominous, roiling around Glass mt, a taste of things to come. (twss).

Contemplate the day ahead of rest, gotta exercise or die, work on the tuol. guidebook and catch up with friends scattered like chaff up and down the eastside. This is a frame of mind, all very aware that nature is in control out here, in spite of long periods of sweet times, do anything any day, now we enter the time of conflict, man vs. nature, creative solutions to life-threatening, or at least uncomfortable events."people out here have to be resourceful" was Judy's observation. I've got 2 chords of wood, hard and soft for warmth and a flick of the switch activates the propane furnace, so i'm set, just some details like the irrigation system, drags from my reverie watching the mts go by, sun on the trees at the top of the vast fan of M. canyon, my viewscape. Lights were coming outta there last night, late, who was up there? an annual trip to the waterfall has to be planned and executed. Ill call some friends to see who might be up for it. Walt Hoffmann retired ranger, or Dancingbears? or even D? too many thoughts, not enough action, gotta get to it. Dylan on the radio spurs me on.

Into the driving snow flurries, comin down over the fan, drain the irrigation, empty the hoses, check the heater in the pump house, gotta check again. Look over Wins handiwork, neatly stacked cord of fir, awaiting their deaths in a blaze of glory. Raked and shoveled area to drain away from the house, trees still kickin some bursting at the seams from the rabbit fence looking like hourglasses. Cover the outside furniture, load the dump run, and so it goes. Ill post this, if you dont wanna hear it lemme know.
Posted by Terry's world at 9:18 AM

Terry's world
Being the record of my ramblings about the world and impressions of wilderness, activities, and things done to keep an old fart with a pacemaker going.